Finally the Trilogy is Complete!

Finally the Vampire Trilogy is Complete! 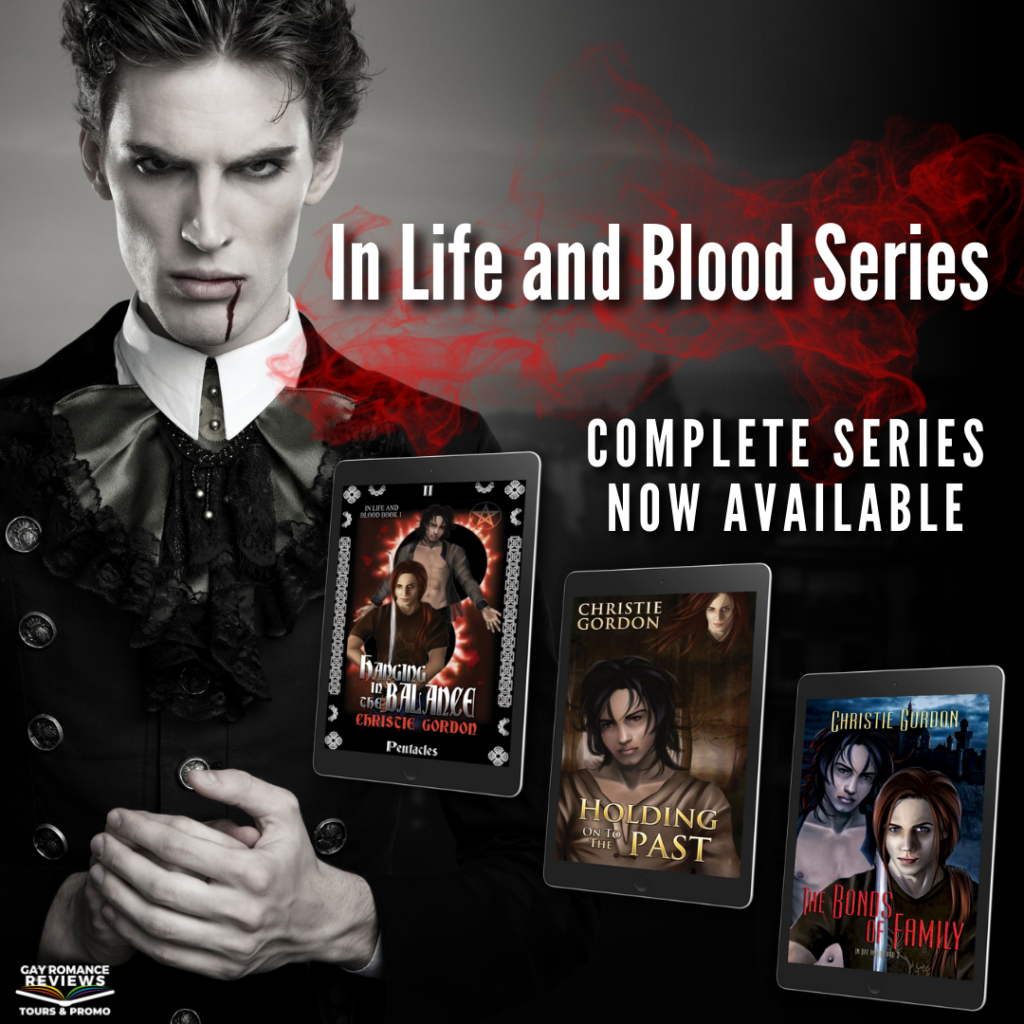 This series started for me about eight years ago when I had an idea about a vampire story that would take characters from two of my favorite animes at the time and pair them together. I was thinking of something along the lines of Alucard from Hellsing paired with Haji from Blood+. But of course, these things take on a mind of their own and Sebastian and Julian were born instead:)

After writing the first two books, my personal life became very complicated, including losing my mother suddenly, and I was unable to finish the third book. I took six long years off from writing. Thank goodness, that’s all over and today, the Trilogy is done and released at all retailers. Finally, there is an HEA for Sebastian and Julian.

There is a raffle (there is always a raffle) for six of you to win your choice of books 1 or 2 in the series.

On to the Excerpt...

“You know I have to find out.” Julian’s heart pounded in his chest as if it would break free. There was no way anyone could keep him from finding out if his family was indeed here. He scanned the room, wearing only his jeans, at the leather couch and contemporary furnishings of their family room, at Sebastian’s beloved gold and red, Romanian icons hanging from the walls.

With an audible exhale, Sebastian shut his eyes tight and pinched the bridge of his nose, his black hair falling in waves to his shoulders over his black, button-down shirt, his bottom half still bare after their lovemaking. “Let this wait until tomorrow.” He breathed deeply and looked at Julian with black, almond-shaped eyes. “Tomorrow we will meet with my father. You can bring it to his attention.”

Julian stared at Sebastian. Would they let me see them? What would I do if they said no? He opened his mouth to speak but clamped it shut.

Sebastian stepped to Julian, then took his hand in his and kissed his cheek, sliding his long, chestnut-colored hair to the side. “We’ve had a very busy day today. Let us go to bed and deal with this in the morning.”

He nodded his head. The haze of possibility threatened to overwhelm him. “You’re right.” As he strolled with Sebastian into the hallway, he stopped at Nikolai’s door, opened it, and peeked inside. Nikolai was still here. He released a long exhale.

Nikolai lay fast asleep in a mission-style bed with a tan comforter drawn up to his chin. The crescent moon shining outside an open window above the bed gave the twelve-year-old boy a blue glow to his blond hair.

“We almost lost him.” Momentary panic pricked his heart. The memory of the fight with Caesar in the cave came rushing forward. He shut it away. Caesar was dead and they were safe now.

“And I almost lost both of you.” As Sebastian wrapped his arms around Julian’s shoulders from behind, he whispered into his ear, “It’s over now. Come to bed.”

He followed Sebastian into the doorway of their master bedroom, wrinkling his brow. His family was out there. How long would it take to fall asleep knowing that?