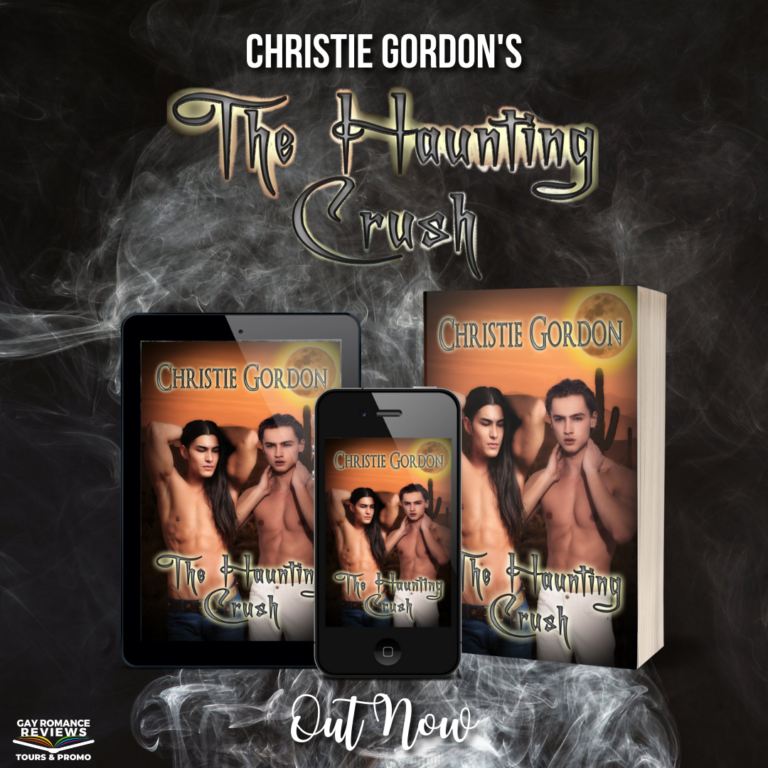 This book takes place in my home town and includes the true tale of the Ashbrook Wash Ghost, so it’s pretty near to my heart. I wrote this also to point out some of the dynamics I see living in a small town on the outskirts of Phoenix, Arizona – including race (we are on the edge of the Pima reservation), how gay people are treated (well and not so well) and the stark division between the have’s and the have not’s. Though Kai and Conner are fictitious characters, they embolden some of the characteristics I’ve seen as a parent of two now young adults who grew up here.  There are kids living in mansions in the desert who go to school with kids on welfare and food stamps, whose home life is anything, but normal. For the most part, everyone gets along pretty well. However, there are the bullies.

I added the ghost story here, because I love the series Ghost Adventures and I’ve had quite a few ghostly experiences myself. When I was a kid, my friends and I used to do these seances with a table (like in the book) and at one point, we found our kitchen cabinet doors opening and closing by themselves. I was fortunate in that my father was an Episcopalian priest, so he blessed the house and forbade us from having any more seances and everything stopped. I’ll just add that I lived in the duplex Kai and Bryce live in and I’m telling you, there is something in that place, LOL. I did see a shadow figure in my bedroom there (believe it or not). Okay, on to the book…

This time around, three lucky readers will get to pick their choice of any of my published works, including this book! There is also a free Prequel read for this book if you sign up for my newsletter🙂

And now, the Excerpt:

“Here’s your beer.” Brandon, sitting next to Kai, pushed a fresh beer toward him.

Kai surveyed the table. It was empty. Not good. “Where is everyone?”

Brandon poked at Kai’s arm. “Out dancing. Want to dance?”

Conner walked up from behind him. “Brandon. What are you doing with my boyfriend?” He slid in between Kai and Brandon, his back to the table, resting an elbow on it.

Kai hung his mouth open and stared at Conner. What the actual fuck is going on tonight? Has everyone gone insane?

Brandon scoffed. “Since when is Kai your boyfriend?”

“Since last weekend.” Conner puffed out his chest. “Right, Kai?” He glanced at him and lifted his brows.

Conner must be doing the fake boyfriend routine to try and help him get rid of Brandon. He’d go along with it for now. He snapped his mouth shut and wrinkled his forehead. “Y-yeah. Last weekend.” He glanced at Brandon, then focused on his beer. He’d need more than this one to get through this night.

Brandon leaned over the table, glaring at him. “Why didn’t you say something?”

“It’s still new. Isn’t it, baby?” Conner wrapped an arm around him and squeezed, then kissed him on the head.

Baby? Is he nuts? Kai snarled and shook his head. “Yeah, it’s new.” Conner kissed me. Holy fucking shit. He bit his lip, then peeked at Brandon.

Brandon slid off his stool, glared at Conner, then stomped off.

He dropped his arm from Kai’s shoulders, then sat at the barstool vacated by Brandon. He came close to Kai. “So, I guess I need your phone number if you’re going to be my boyfriend.”

“Stop it. I am not your boyfriend.” What was Conner trying to pull? He straightened and faced him.

“I still want your number.” Conner shimmied his cell phone out of the front pocket of his jeans, opened the interface and handed it to him. “Please? Then I can tell you when I’m going out of town, so you won’t get mad at me.” He snickered.

Heat flushed Kai’s face. He must have been pretty obvious in the bathroom. “Yeah, okay.” He relaxed his shoulders and entered his number, then handed the phone to Conner.

He called the number.

Kai’s phone buzzed in his back pocket and he slid it out, then turned it off.

“There, now you have my number, too.” Conner smiled at him. “Want to get a Jell-O shot with me?”