In Life and Blood Book 2: Holding onto the Past – Release Date and Sneak Preview! 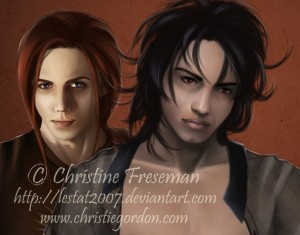 After enduring a crashed hard drive which totally wiped out all of my data, including the first version of this book, I have finally rewritten the second book in the In Life and Blood series. I just received a release date of May 1, 2011 from my publisher. I’m now frantically working on the cover;) Anyhow, this book is about Sebastian and is told from his point of view. I had lots of fun researching Dacian (Ancient Romanian) life, finding slang words in Romanian and translating little bits of English into Romanian. For instance, did you know that a really big insult in Romanian is to basically tell someone to go back up in their mother’s womb where they came from? And they apparently talk about the penis a lot when swearing, LOL. Like, pula mea, which they use like an English speaking person would use as “fuck”, and literally means, “my cock”.

On with the sneak peak (unedited) :

“Oh my God, what’s happened?” Julian, in a sweatshirt and jeans, threw his arms around Sebastian and held him tight. “Talk to me.”

Sniffling, he wrapped his arms around his lover. “My angel, you are here and not dead.”

“What? Of course not.” Julian kissed the side of Sebastian’s head.

He left the door open. Anger fluttered up his spine. He shoved Julian away. Glaring at his lover, he said, “What the hell were you thinking leaving the door open like that?” He swiped at the wetness on his face.

Julian’s eyes widened in surprise. “What?”

Nikolai raced from the edge of the wall toward his bedroom.

“You left the house wide open. Anyone could have gotten in here. Anyone.” He placed his hands on his hips.

“B-but we were just, just outside. I was showing Nikolai an owl and—“

“Never, ever leave the house like that. And don’t ever go outside without my permission.” He pointed at Julian.

Anger spread over Julian’s face. He gritted his teeth. “Don’t you tell me what to do. If I want to go outside I will. My days of being imprisoned are over.”

Stunned, he took a step back and placed his fingertips on his forehead. “Uh, I’m, I’m sorry, Julian. I didn’t mean it that way.” His anger morphed into relief. He looked around the room a moment. “I was afraid something happened to you both.”

Julian’s stance relaxed. “No, it didn’t. We were just looking at a damn owl in the tree out back.” He looked down at his feet and back up at Sebastian. “Nikolai was all excited about it.” He studied Sebastian. “Sebastian, you were crying when I walked in. I don’t ever think I’ve seen you cry before. What’s going on?”

He turned around and looked at the black and stainless gas stove, hiding a new wave of embarrassment and guilt as best he could. “It’s just that the situation, the door being open like that, reminded me of how I found my mother’s corpse all those years ago.” Solid hands gripped his shoulders and turned him around. He gazed down into his lover’s beautiful, blue-grey eyes.

Wisps of long, chestnut-colored hair surrounded Julian’s face and spilled out over the dark sweatshirt covering his shoulders. “I’m so sorry. Tell me about it.”

He shut his eyes a second and shook his head. “It’s all right now. You are safe.”

He let out a long exhale. I must tell Julian something for my behavior. “It was during the Hun wars. I found the door to our home open. It was obvious that there had been a struggle. I found her on the floor, a terrible wound in her head. I was a newly made vampire and I tried to save her with my blood, but I couldn’t.” Remorse wound around his heart again. And so I drank her blood instead. He took in a ragged breath of air.

“I feel it, Sebastian. I feel how much this saddens you still.” Wrapping his arms around Sebastian, Julian pulled him in close. “I love you and I promise nothing like that will ever happen to me. I’ll be careful. I can protect myself. Especially when it comes to Caesar.”

“No, you can’t.” He breathed in Julian’s musky scent, all clover and spice, relishing in his embrace. “He is far more dangerous than we thought.”

“Why do you say that?” Julian’s lips found Sebastian’s, placing a lingering kiss over them.

A prick of alarm raced inside him. Stupid, do not say such things. “No reason in particular. I just want you to keep your guard up until this whole incident with your old coven is resolved.”

Julian released Sebastian and stepped back. “You know I will. And now I have my sword back in case the Templars need me.” He smiled at Sebastian.

He’d make sure that would never happen. “So you found it at the door?”

“I sure did.” Julian twisted and came back around to face Sebastian. “I think we scared the crap out of Nikolai.”

Relief rained down on Sebastian and a wide grin spread over his face. “I think you’re right. It was our first fight, my angel.”