As most of you may have heard, I put out a call last week for authors and readers of M/M Romance and Yaoi to be guest bloggers right here. There was a really great response and I’m pleased to say that for the next few months, there should be some fun discussion from avid readers and authors alike about the subject. I’ve asked the bloggers to talk about things like:

Some of the authors I’ve already booked are (in order of appearance):

Plus I’ve got a few readers to blog as well. If anyone reading this wants to join in and guest blog, please contact me at: Contact

All in all, it should be a fun couple of months here, so please check by often to see what’s up. Of course, I’ll be announcing the guest bloggers at all my usual places, Twitter, Facebook and MySpace (Links and follow info to the right there).

And that picture at the top, holy cow – I swear that is exactly what I picture Logan to look like in my next full-length novel, “Secrets“. 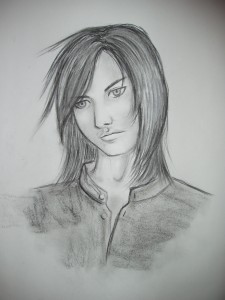 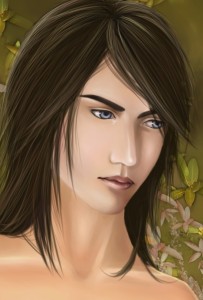 Hot Anime Men in the Spotlight

Okay, so the question today is, who is your favorite hot anime guy and why?

Off the top of my head I’m thinking about all the Gundam series, starting with Wing and ending with 00, just because I have yet to find a place that is streaming Gundam Unicorn online (but if I find one, I’ll let y’all know.). In Wing, we have Duo, Heero, Trowa, Quatre and Wufei. I think I like Due and Heero most, of course the dude with the long hair and the silent strong type;) I believe they are my favorite yaoi pairing from this series, too. As far as the Gundam Seeds go, I love Kira and Athrun. Kira is just so… well angsty and Athrun is the sensitive type that I wish more dudes had in them. And then of Gundam 00, my favorites are Neil Dylandy (first only to his twin brother Lyle) and Allelujah Haptism. Setsuna, though very angsty, just seems too young to me and I’m sorry, Tieria is really a girl with a male voice, isn’t he? LOL 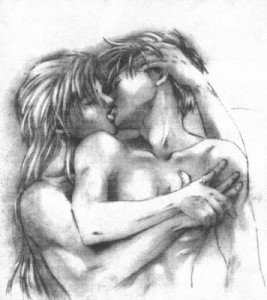 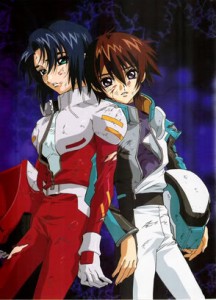 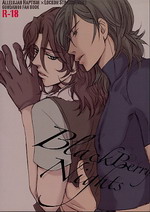 I could name so many, like Kira and L from Death Note, Ichigo and Renji from Bleach(I just recorded the Bleach movies they showed on Adult Swim last night), Cain, Able and Hugue from Trinity Blood(love, love, Hugue), Hagi from Blood +, Amon from Witch Hunter Robin, Cloud and Vincent from Final Fantasy and Edward Elric and Roy Mustang from FMA (you didn’t think I’d forget them, did you?)  and so on.

Let’s get on to why these characters appeal to us. First and foremost for me, artwork in the anime is of utmost importance. I’m thinking Death Note, Blood Trinity, Final Fantasy and Gundam 00 here. I think everything in these series is beautifully drawn, let alone the characters. And they always have cool hair. What’s up withe free flowing, long and gorgeous hair in anime guys? Why can’t real guys look like that? Oh wait, JRockers pretty much do;) I’ve always liked dudes with long hair and I don’t know why. Maybe someday I’ll have to examine this more with a therapist, LOL. But even when I was a teenager, I always went for the dude with the longest hair and bonus if he had dark hair (black preferable). Of course, I dated a lot of musicians (and still do). Hair is my favorite part to draw when I do my own artwork and notice, not many dudes with short hair. 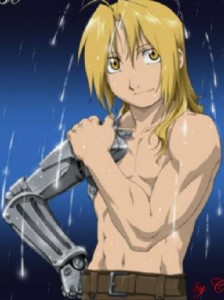 Moving on, how about how these guy’s bodies are drawn? Even the supposed high schoolers have a body to die for. We’re talking muscled hairless chests, six pack abs and long and lean. This is just my type as well. Not only do I like my men to have long hair, but I prefer them to have more of a lean body – none of this muscle bound, I can’t put my arms all the way down, types. And no, I do not like facial hair or a whole lot of chest hair and too bad. I like what I like and it happens to be just what anime dudes look like. Maybe this is why manga and anime appeal much more to me than Marvel Comics and  American cartoons (that was a whole other blog – “What’s up with American Animation?”)

With all the short haired, muscled dudes you see on romance novels and such and the types of guys my friends date (uh, that type), it makes me think that my taste is a little, well, eccentric. Or maybe I’m just out of the closet and there are legions of women who don’t really like the culture-driven, spoon-fed types of guys that are on television and romance novel book covers. Maybe there are hordes of us who really, secretly long for dudes who look like Lockon Stratos and Hugue. I mean, Fabio was pretty popular at one point, right? What happened to all those women? Did they all just go back in their closets?