I update this page often with my list of Yaoi, MM Romance books that are in progress and release dates/covers as soon as I get them. To be sure you don’t miss out on these updates (and for giveaways and free reads) sign up for my Newsletter. 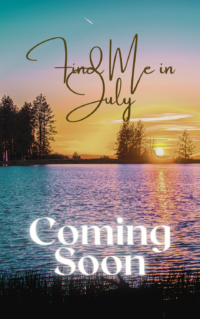 Find Me in July: A Vintage Yaoi, MM Romance

Troy lives to be a teacher. Jessie knows teachers can’t be gay. These facts could rip them apart.

It’s the summer of 1978. Troy Larson is only one university-year away from living his dream as an elementary school teacher. In the meantime, he’s heading to his family’s annual, month-long vacation at a Northern Minnesota lake resort. He’s looking forward to time with his best friend, Jessie, and finding out what happened to him. This year was odd. They hardly spoke on the phone and Jessie didn’t come home for the usual breaks. When they meet, it’s clear something’s off with Jessie. One day in, Troy secretly stumbles upon Jessie in an illicit act with another man. The incident triggers questions about Jessie’s sexuality and confusion about his own.

Jessie Smith is set to take over his father’s Minneapolis foundry when he graduates from a New York university next year. But the time in New York has taught him how to accept his sexuality and his newfound freedom is not something he’s willing to give up. As the families meet for their vacation, it’s clear that Jessie is different. After the first day, Jessie sees an abrupt change in Troy, and it’s baffling. The changes in Troy cause a lifetime of repressed feelings to surface in him.

Troy’s pursuit of the truth brings him closer to Jessie than he ever thought he would want to be. He struggles to understand what’s going on between them and how his best friend is turning into more, way more. With the gay rights movement facing legal challenges from Save our Children, can Troy convince Jessie he’s willing to fight along side him and face whatever consequences may come together?

Chase is controlled. River is anything but. The two together, on and off the court, are a force to reckon with.

Chase Rossi is the first singles on his Northern Arizona University tennis team, and he’d like it to stay that way in his senior year. In his love life, he’s only allowed himself to love a man once and it was a big mistake. The guy was straight. So, he made the decision to date only women but can’t keep them interested in him for more than three months. Every time. Maybe it’s the controlled manner in which he lives his life, on and off the court. Maybe he’s just boring. But one thing he knows, he hates River Adams.

River Adams is at the point in his tennis career when it’s time to go pro or go home. He’s a big personality known as much for his antics as his wins and his bisexuality. At a tournament over the summer, he makes a fool of Chase. But soon after, his mother is diagnosed with stage four pancreatic cancer and his game suffers. So much so, that he decides to play for NAU’s tennis team and put off his dream of going pro. He’s now vying for Chase’s position on the team.

The team coach sees the learning potential right away in Chase and River’s opposing playing styles. He pits them against each other, hoping to make greater players out of both of them in the process. But River’s winning strategy includes shattering Chase’s focus with sexual innuendos, something he continues off the court. When Chase shows signs of interest instead of hatred, River is totally on board. As River struggles with his mother’s illness and a drug addicted, absent father, Chase becomes his rock. The question is, can their new relationship endure the dreaded three-month mark? 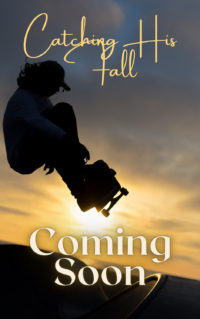 Max has a plan. Tanner doesn’t do plans. Plan or not, they’re better off together.

Max Thompson has a few problems. He’s spending too much time at the skatepark watching a mysterious, unattainable young man he refers to as skater boy. Meanwhile, his college fund is running dry in his senior year at Arizona State University and it’s time to find a roommate to help with expenses. Hopefully one that’s not too weird this time. He’s spent his college years staying away from love to focus on school, but he can’t get skater boy out of his head.

Tanner Donahue is a hard-working assistant manager at a grocery store, who likes to skateboard and play guitar in a cover band in his spare time.  But Tanner has his own problems. The first being the fact that he hooked up with and fell for his roommate and coworker who has decided a relationship with a guy is not what he wants. It’s time for Tanner to find a new place to live and learn from his mistake.

When Tanner shows up on Max’s doorstep with his Guinea pig, Stan, vying to rent the room Max has available, Max jumps at the chance. Max soon realizes he’s going to have to walk a fine line if he’s going to make Tanner his own while living together. It doesn’t help that Tanner’s old roommate wants him back and Tanner’s family situation is complicated at best. Tanner was raised by conservative grandparents after his father went to prison and his mother abandoned him, or so Tanner thinks. As truths are revealed and problems pile up, can Max and Tanner navigate what’s thrown at them to come out together?

Read More and Preview
We use cookies to improve user experience, and analyze website traffic. For these reasons, we may share your site usage data with our analytics partners. By clicking “Accept,” you consent to store on your device all the technologies described in our Privacy Policy. Accept