I don’t know what I have against this company, except that they’re known for producing sappy romance novels involving happy endings with heterosexual couples getting married and having babies. There’s always the stereotypical alpha male hero and the blushing - OMG, I hate him, but I love him, but I can’t have sex with him – heroine. I…HATE…THAT. In fact, I think this type of romance novel is the very reason I’ve never read one before I started writing fanfiction and the only type of romance novel I’ve ever read is M/M or Yaoi.

Now back to Harlequin, the book mecca of all things neat and orderly and in their place (love before sex, marriage before sex, marriage before baby, all babies and husbands are perfect, a woman can’t be happy without a husband and gay people don’t exist – oh, I could just scream). So I hear they have a manga line. I hear they’ve even hired mangakas to do the artwork for their manga line. And they even showed them off at Yaoi Con in San Francisco. BUT THEY STILL HAVE THE REDICULOUS STORIES ABOUT LITTLE BO PEEP FINDING HER PRINCE CHARMING IN THE LATE 1880′S.  *falls over with a seizure*

And yes, I know that by posting this I’m giving them publicity and even negative publicity is good publicity, but I just can’t help myself. If you find you like that sort of thing, have at it. I won’t judge you (okay, maybe a bit 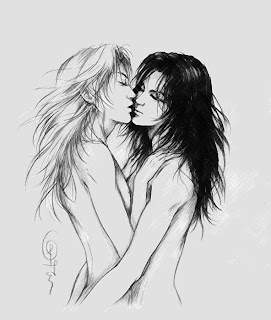