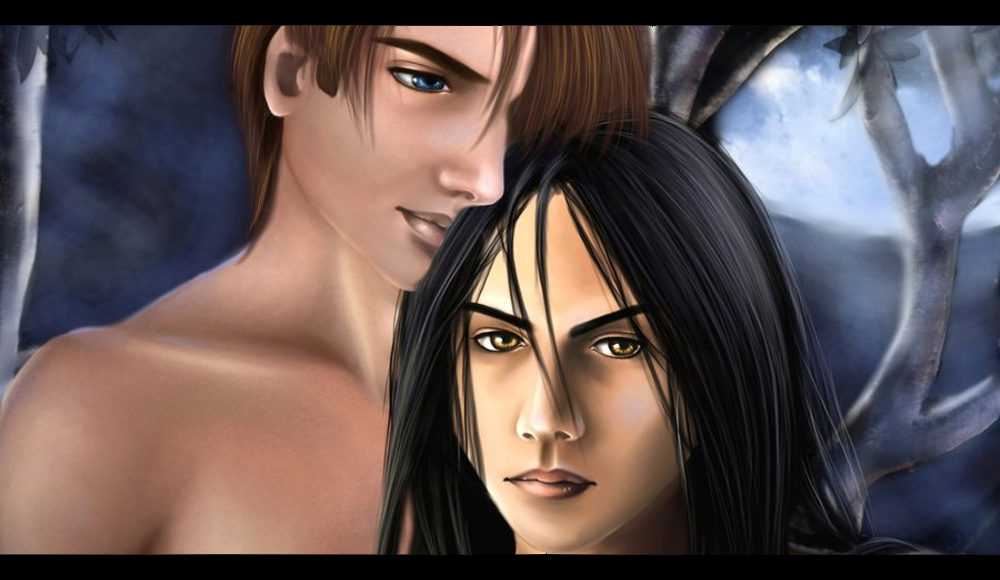 A warm body behind Adam stirred. An arm, draped around his waist, grew tight against him. His eyes fluttered open to gaze upon the white plaster of his wall. The bright beams and shadows of the morning sun set the room aglow, shining through cypress boughs and mullioned windows.

Finding the strange hand with the clawed fingers on his belly, he entwined his fingers in it and squeezed.

“Yeah.” When was the last time he allowed someone to spend the night with him? Maybe never. It felt good, waking in Necalli’s arms.

“What is that picture?”

He gazed up at the picture of his family tacked to the wall. Reaching up, he carefully removed it and brought it down. Necalli moved away from him, allowing him to roll onto his back. The two lay side-by-side on the bed. He held the picture up over them for Necalli to see. “This was my family. My mother.” He pointed to her. “My father.” He pointed to him. “And, my little sister, Aloise.” His finger stayed on the picture, over her image.

“Why does the picture sadden you?”

He looked at the ceiling. Sudden tears stung his eyes. Not because of the memory so much, but because of the pure concern in Necalli’s voice, his uncanny ability to already know his feelings without being told. Reaching a hand up, he rubbed his eyes with his thumb and index finger. “They passed away, in a house fire, when I was twelve, eight years ago.”

“And you miss them?” Necalli placed his hand on Adam’s arm.

“Yes, terribly. Especially my sister, she was so precious. But, I couldn’t save her.”

“You tried?” Necalli turned to his side and propped his head by an elbow.

A tear escaped Adam’s fingers and rolled down the side of his face. “My mother pleaded with me to, but I couldn’t save her without being killed myself.” Another rebellious tear worked its way free to fall down his cheek.

Reaching up, Necalli took Adam’s hand from his eyes and brought his arm down to rest at his side. “It’s okay to feel sorrow for the ones you’ve lost. Just don’t let your loss frighten you into being alone.”

Gasping, he dropped the picture and rolled into Necalli’s chest. He grasped at his sides in a desperate attempt to hang on to him.

“Damn it. How do you know so much? Who are you?” His voice muffled against Necalli’s chest.

“I can be whoever you want.” Necalli kissed the top of his head.