Never as on Valentine’s Day is it more pressing to find a soul mate, if one’s lacking of course. And how ironic if once found, it needs convincing that he or her is the one, which is what happened to Martin in To Seduce A Soulmate. 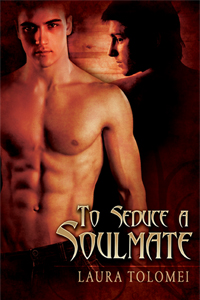 Martin stretched across the table. “Just answer me honestly. Before you met me, have you ever felt you recognized a complete stranger before in your life? Or felt an electrical current run through your body merely by standing next to someone? Or felt your heart beat so fast you feared it might fall out of your chest?”

With a heavy heart, Drake realized there was no point in lying so he had to shake his head in denial, long hair flying around.

“But you did the moment you saw me, right?”

Having felt all that Martin had described, if not more, Drake’s head reluctantly gave in to tentative nod in agreement with the devil’s insight.

“And you still need more proof?”

“I don’t think these signs mean anything. My first crush was surprisingly similar to what you just described…except the recognition part, but that may be a trick of the mind.”

Martin eyed him coldly. “Suit yourself, Pirate. You’re free to believe what you like and I’m not going to convince you. It would be a wasted effort. On my part, I’m just happy to know I’m not crazy.”

Read more on To Seduce A Soulmate

And just for the record, he wasn’t. Luckily, not all soul mates are so recalcitrant, though they’re tied in a dark circle of blood, betrayal and passion from which there is often no return, like in Divinitas. 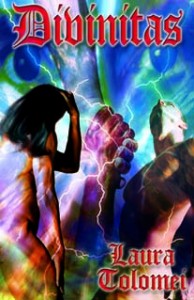 Shaun grinned. It had taken a long training to remind Halifax who he was and now that it was finally time to explain, it felt odd, maybe because their positions seemed reversed if compared to previous lives. Shifting through past scenarios, Shaun briefly analyzed their timeless relationship, searching for answers. Somehow, Halifax had always been the seducer rather than the seduced. Reversing their roles was a necessary shift, the Druid knew it far too well, but he still had to get used to it.

“Please,” the blond missionary begged, “tell me about it.”

Where to begin? From the ancient walls of Egypt or the Persian prince’s golden bed? From our love…or the betrayal that followed Shaun wondered as images kept playing in the fire.

Well, maybe it’s not always so complicated. Take Leon and Sean’s case in Tasting Leon’s Mark, the passionate sequel to Re-Scue, soon to be released. where redemption came after all the moment they understood how their connection worked. 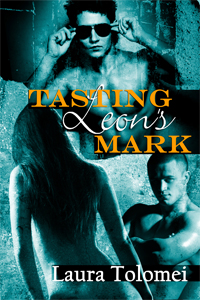 As usual, Sean’s insight took Leon by surprise. The more he knew the blond beauty, the more he found his intuition extraordinary. Even more surprising, his amazing brain learned fast to make the right connections. That he was learning more about Leon than anyone else before him was a reality, which perhaps justified the hunter’s need to challenge him as if wanting to be perfectly sure he was the one. And the fact the blond beauty’s lifetime experiences had given him the edge to alter their relationship and bring it to a new balance, however frail it might prove at times, was not conclusive enough.

As Leon’s Indian guru had revealed, his karma changed every time he understood the lessons that he had not grasped in the previous lifetimes. “Life is the soul’s testing ground,” his teacher loved to repeat. “Its ultimate goal is Awareness and you can’t reach it unless you truly deserve it. That’s why life is an endless learning process that doesn’t stop in one lifetime, but continues until the soul acquires perfection by understanding its faulty patterns and correcting them.”

His lifetimes with Sean had always added extra pieces to their puzzle, inevitably changing their karma from one life to the next. Their new forms were the results of such lifetimes and through each, Leon had to admit, the real learner had been Sean. From the start, he had found the way to adapt to the hunter’s immutable challenge while working to change him, too, until his 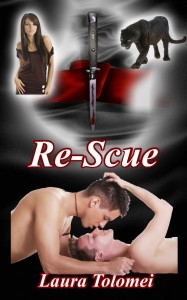 masterful plan had revolutionized their relationship.

Living together had been an important step in their development, one that Leon would have never taken if Sean had not forced the situation. Only then had the hunter understood who was and always had been the key of his development. So he had agreed to turn the page and end their bloody game, which did not seem to fit their evolutions anyway, considering how different they were from the original two who had started it in the first place. And to his amazement, he had not missed it, getting caught, instead, in a whole new sensual world.

The same that another of my favorite characters, Duncan and Chris, from my Virtus Saga, have been experiencing ever since they laid eyes on each other, for they, too, are soul mates, as confirmed by Lord Christopher Templeton’s words in The Sex Book 1: 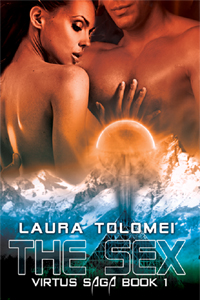 All my father’s fault anyway, for wanting to send me, his third and youngest son, to the Caldwell’s to broaden my horizons, or so he claimed. Clinging to his two brothers, eight-years-old Chris had wanted to tell James Templeton it was a useless attempt for his convictions would never change no matter how far he went, but his young age had prevented any serious argument. Still, he was old enough to know what he wanted from life and women were definitely not on the list, in spite of what his father said or did.

Alas, nothing stopped the tragic—or rather blessed, as he later came to see it—chain of events. Exiled from his home, Fair Haven, little Chris had set out on a long journey, for which he had no taste or choice either, cursing the Caldwell’s at every step, along with anyone even remotely connected to them, until destiny had caught up with him at Black Rose’s last bend.

Twisting around the many hills leading up to the estate, he first heard a boy’s happy shout. “Ready or not, here I come.” Another curve and he glimpsed the back of him, dark head lit by Stella’s rays. “It’s no good running, Ylianor.” The boy kept yelling at a little girl. “I’ll catch you.” He seemed all set to go while Chris approached the last bend, but curiously something stopped him and he looked over his shoulder one second before Chris came into full view on the other side of the hill.

With a heart pounding so fast it could’ve dropped out at any moment, Chris had stared at the piercing black eyes transfixed, unmoving, unable to talk, think, breathe or do much else besides recognizing the dark-haired boy, though he had never set eyes on him before in his life. And that the other boy knew him, too, Chris read it clearly in the inquisitive gaze. So it happened, impossibility becoming reality as the unconscious tried to shed light on age-old connections that obviously neither had ever forgotten, though they seemed incomprehensible at present.

Read more on The Sex

Read more on the Virtus Saga