I’m very pleased to welcome M/M Romance author, Xavier Axelson, to my blog. We had a little Q&A session and here’s how it all went down:

Tell us about yourself:

I’m a writer of erotica for Silver Publishing and Seventh Window Publications.  I also write the Los Angeles Sex Advice Columnist for Examiner.com, and a column for All Bear Online Magazine.

If you could pick any two male characters from television or film to get together in an M/M Romance novel, who would they be?

What do you think is the hottest M/M Romance sex scene and why?

A sex scene that is true to what the characters are feeling is what I find most arousing.  I think it’s hot when a writer can infuse a sex scene with honest sexuality while maintaining the sensuality.

Alpha or beta? Who’s your favorite? Why?

I’ve never written a story with a distinct alpha or beta character, so I guess I don’t have a preference.

When and how did you start writing M/M Romances?

Do you tell acquaintances about what you write? Why or why not?

I’ve worked in the adult industries for over 15 years; I’m pretty sure the jig is up.

Tell us the story about how you became published:

I answered the 25 Days of Christmas submission call over at Silver Publishing, and the rest is history.

Tell us about your latest release:

When Pryor’s daughter Lily is taken by a wolf, Pryor is convinced she has turned into the creature he sees lurking in his woods.  He swears she promises to return to him. But is it his despair and desperation making him see things or is there something more lurking in the shadows of the forest?  When he meets Ned, a silversmith who helps him with a plan to bring his daughter back into his life, he begins to live again. But can his newfound love help ease the horror that may be waiting? What if the ultimate horror isn’t when Lily was taken but it’s when Lily returns and he realizes his nightmare has only just begun…

Which character is your favorite in this book and why?

I’ve come to really appreciate Pryor for his endurance and bravery.

If you could pick a song to describe the love story in your latest book, what would it be?

The only thing that is coming to me is More Human Than Human by Rob Zombie; somehow it’s fitting.

And there you have it. You can find Xavier Axelson at the following websites: 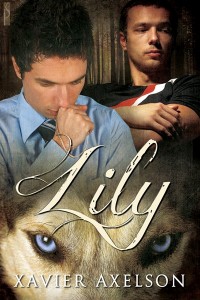 Blurb:
When Pryor’s daughter Lily is taken by a wolf, Pryor is convinced she has turned into the creature he sees lurking in his woods.  He swears she promises to return to him. But is it his despair and desperation making him see things or is there something more lurking in the shadows of the forest?  When he meets Ned, a silversmith who helps him with a plan to bring his daughter back into his life, he begins to live again. But can his newfound love help ease the horror that may be waiting? What if the ultimate horror isn’t when Lily was taken but it’s when Lily returns and he realizes his nightmare has only just begun…

I am Lily’s father, my name is Pryor. It was a year ago last Father’s Day when she was taken from me. I still believe being Lily’s father is the most important thing in this world.

Unfortunately, my daughter dwells in another world.

I glanced at the necklace. Ned’s pressed close to me, but the necklace I hoped would bring Lily back to me felt closer. Ned was soft in his sleep; not the bull of a man he was when he’s awake. I loved him soft and I loved him hard. It was his hardness that grounded me, that brought me in from the darkness. The necklace caught the light of the fading moon and I wondered where Lily was tonight.

The old clock on the nightstand hummed quietly; its vintage florescent glow a pale mockery of the necklace that lay beside it and yet I heard the clock, it won in that department. Time always does.

Ned moved against me, I could feel his arms pull me close, felt the bulge of his muscles, his arms thick and powerful. He had never loved a man before me. I had only loved Lily. Once she changed, I had little left to love; in fact, I was certain love had disappeared from my life all together.

The clock still hummed, never quiet; it’s old and made noise as if time itself wanted us all to know that it was passing and with each minute Lily fell farther and farther into the darkness. The tears came then and at the same time Ned’s cock pushed more firmly against my back. He grumbled, pulled me even tighter so that I could truly feel his penis–not hard, not entirely soft–on the edge of wanting. A tear fell and I gasped a little. Seeing the necklace; hearing the clock, feeling Ned’s cock, his muscles, I fell away into him and closed my eyes.

“Why aren’t you sleeping?”

“No you weren’t,” his voice was sleepy; distant and yet he knew things, he knew I was awake, thinking about my lost daughter.

“It’s Father’s Day,” I answered, skipping over my lie. “Do you think she will come?” I felt him nod and nodded in return against my pillow. Another tear fell.

“How much closer could I get?”

“Closer,” he said again, a growl, a grunt; there was the bull I knew.

His lips brushed on my neck, a hand on my thigh stroking, touching, pulling a sigh from my mouth. I wiped a hand across my face.

“I never get sick of touching you,” he whispered wetly, his tongue tracing my ear.

Smiling, I turned in his big arms and I could feel my thoughts ease. Ned had that way about him. ‘Magic arms’ I called him because he had this way of holding me that made me feel completely safe and for one man to be able to do that for another was amazing.

I kissed him and was happy to discover his breath was not bad but sweet, the trace of his toothpaste before bed still there and I smiled even as I kissed him. Ned sighed gently, his cock fully hard now, urgent, pressing. I reached down and stroked him through his boxers; he was already wet. I tried to pull my tongue from his mouth but he only pulled me closer, deeper; at one point I was almost certain one of us was going to stop breathing.

He finally relented but only because I jokingly squeezed his balls a little too tightly.

“Fuck, you make me nuts,” he grumbled, we both laughed at his joke.

His hand reached for my cock; I slept naked so there was no flimsy cotton between his rough hands and my skin.

I nodded, I did like it, I’d thought I wouldn’t ever be able to like sex again, or any intimacy after Lily disappeared.

His hands were rough but I relished his edges; he touched me as if he knew me and, after a year, I guess he kind of did.

“You want me to suck it?” His voice was hoarse with his question; there was still a shy embarrassment behind it, as if he couldn’t really believe he was going to suck cock.

“What do you think?”

My response excited him. I could see it in his eyes, even in the dark; the fading moon told me just enough.

When you had a daughter like mine, you learned a lot from the moon.

One Response to “Who would M/M Romance author, Xavier Axelson, want to see in bed? Find out!”