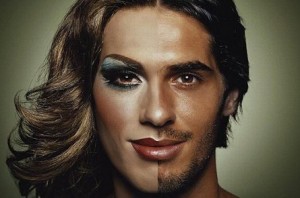 Wow, this is a tough topic these days. I just found out about AJ Llewellyn being a woman. Yes, a woman, not the gay man she pretended to be.

We both started out at eXtasy Books writing M/M Romance, though I prefer to write more of the Yaoi variety:) I’ve had plenty of banter back and forth with AJ about writing, the M/M genre and the like and I must say I feel a bit… shocked. I know that women have taken male pen names in times past in order to get published and all that. And I know that some female M/M Romance authors have male pen names currently and keep hush about their true identity. I suppose it is no one’s business but their own. Or is it?

Here’s the deal. If I read a M/M Romance book by a particular author with a male pen name, I assume certain things. The first being, that they have first-hand knowledge of what it’s like to be a gay man and maybe I’ll learn a few things. Of course, that’s the author in me. And if and when I encounter this author in a chat or on some social media site, I speak to them as if they’re the gender of their pen name. I take into account their opinions on writing and other topics based on what I think their gender is, right or wrong. I can’t help it. We’ve all been programmed to think a certain way based on our upbringing as a particular gender and have preconceived notions about the opposite gender. I hope that makes sense:)

As far as author gender and writing M/M Romance or even Yaoi for that matter, my question is this: Should authors be straight up about their genders? I mean, we’re writing about gay men for a predominantly straight female audience. M/M Romance is not the same (at least in my eyes) as gay romance – presumably written by gay men with a target audience of gay men. So it seems to me that author gender might matter. Women in general put more emotion into their romances, especially if we’re targeting a female audience. Again, my freakin’ opinion;) But women are emotional creatures. Emotion is what we crave, right?

I’m also wondering if the female authors writing under a male pen name are doing the rest of us authors a disservice. It’s hard to go about telling people who aren’t familiar with this genre that you’re a straight woman writing gay romance. I’ve blogged about my follies with that a few times. You need a thick skin and a hardy sense of humor. Maybe if more of these women writing gay romance for other women were more up front about it, it would normalize the situation a bit more and make it easier for all of us. Stand proud that you’re a straight woman writing about gay men, damn it:)

So now that I’ve said my piece - chime in here. What do you all think?